Yeah, so, my son has autism.

Calvin is a really good kid. He’s very sweet and smart. He gives big hugs, and he has a smile that lights up the world. He’s got a great sense of humor, and he loves to laugh. Calvin also happens to be autistic.

I really haven’t written about this on the blog because the diagnosis wasn’t official. We have been taking Calvin to all kinds of appointments with doctors and specialists for more than a year. We have received all kinds of different diagnoses from “there’s nothing wrong” to sensory processing disorder. I didn’t want to write about it, because I didn’t know what to say.

I feel like I need to write about it now, because the diagnosis is official, and I am so proud of my son. I don’t want anyone to think that I wasn’t writing about it because I am ashamed. It’s the exact opposite. I think Calvin is awesome, and I am so very, very proud of him. He is a wizard in a world of muggles. He is a jedi. He’s the coolest. His entire life he has been struggling to be understood, and he has never given up. And while sometimes he gets frustrated, most of the time he is the happiest kid you’ll ever meet. What a good, little guy he is.

Lately, he is really starting to blossom. While there still isn’t a lot of back and forth communication with Calvin, the words are coming. He understands everything you are saying, and he’s really trying to talk and to be social. And now that he has been officially diagnosed with autism, he is finally going to start getting some help. We are going to start getting some help, and we are so excited. 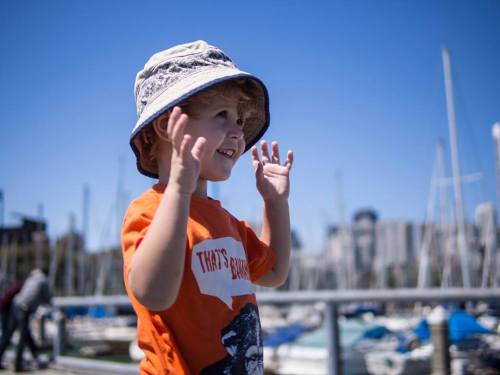 I’ve heard a lot of different things to explain away Calvin’s development or lack thereof throughout the years. He’s a late talker. Boys are late bloomers. Einstein didn’t talk until he was 4. And so on, and so on. We got his hearing tested in November 2013, and it turned out he needed tubes in his ears. Oh shit, The Boy can’t hear. That’s it! That must be it. That wasn’t it. He did start talking more after he got the tubes, but it was still a lot of babbling. Shortly after he started in preschool last year, we started our quest for speech therapy.

Of course, we weren’t just concerned about the lack of communication. There were other warning signs. Calvin likes to wave items in front of his eyes – toys, books or his own fingers. He sometimes runs back and forth because he likes the visual stimulation of things passing by. He is obsessed with fans, especially ceiling fans. He loves to play with cars (like a lot of kids), but he really loves to watch the wheels of the cars. These actions are called sensory seeking behaviors, and My Boy does a lot of them.

We took him to Kaiser first, and they fell into the “there’s nothing wrong” camp, and after three appointments they ultimately rejected Calvin for speech therapy. My gut told me they were wrong, and I called the Golden Gate Regional Center, which is an amazing state-funded organization that provides early development services for children under 3 FOR FREE. They are awesome. We had many, many meetings with them, and filled out countless forms. A behavioral specialist came to our house every Friday for a few months to work with Calvin, and they worked with him at his preschool for a few weeks before his third birthday in an attempt to squeeze in some extra sessions because they wouldn’t be working with him after he turned 3.

We took the GGRC report back to Kaiser to repeal their initial rejection for speech therapy. We wanted speech therapy, and we wanted it through Kaiser. That’s why we pay for medical benefits. Finally, they agreed to an autism assessment, and, well, here we are. My Boy has been officially diagnosed, and he is finally going to get the help he needs. He’s working with a speech therapist, a behavioral specialist and an occupational therapist. 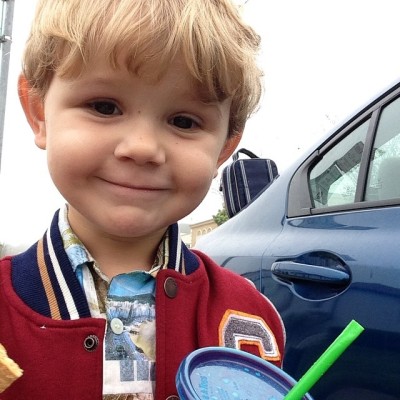 On the autism spectrum, Calvin falls into the moderate category. The doctors have used the term “high functioning,” but I guess that’s a term that they don’t really use anymore. Calvin makes pretty good eye contact. He wants to be social, but he doesn’t really know how to make it happen. He has a buddy or two at school, and he has friends outside of school, too, that he gets very excited to see. He’s very affectionate. He’s not rigid about his routine. He goes to preschool, and he is not disruptive. He just needs a little help, and we are so stoked that he is finally going to get it. Considering that he is doing as well as he is without much in the way of help, I can’t imagine how much his communication and social skills will improve when he starts getting these services. I think it’s going to be really amazing to watch.

So, yeah, Calvin’s diagnosis was about two weeks before I was diagnosed with breast cancer, because life is totally fair and awesome. I’m not going to lie: It’s been tough to juggle. We want to keep Calvin’s appointments, and at the same time, I needed to get my surgery, and I’ll be starting chemotherapy in March. Mighty, mighty good man David has been doing all the heavy lifting for the past month – taking care of me and taking Calvin to his appointments. David is a goddamn hero, and his birthday should be a national holiday. We’ve been spending a lot of time at Kaiser lately. We need some sort of frequent shopper card or something. Maybe I can get a punch card, and my 10th round of chemo is free! Wheee!

I don’t really know how to end this post, so I will just say that while we have a lot of things going on in The MansTracy household, we are also feeling so lucky to have each other. Our little family is a team. 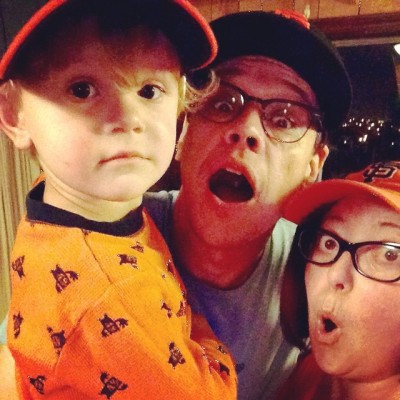 43 thoughts on “About The Boy”