Yeah, so, we have some catching up to do, huh?

I’ve been neglectful. Don’t be mad at me, baby. Take me back.

I’ll do a relatively short wrap up for you and then we will go back to our usual blog posting schedule … I hope.

We rented out the clubhouse at Jackson Playground, because it was the homebase for his a few of his summer camps, so we know he loves it there. We invited friends, family and all the kids in his class and about half of them came, which is rad.

We had a Muni bus birthday cake made from My Favorite Bite, and it was AMAZING! Sometimes you see a cool-looking cake but it tastes kinda yucky – it’s dry, it’s overly sweet, it’s both. But this cake not only looked great, it tasted great.

Calvin was over-the-moon happy! “There’s cake inside the bus!” I mean, look at that smile. 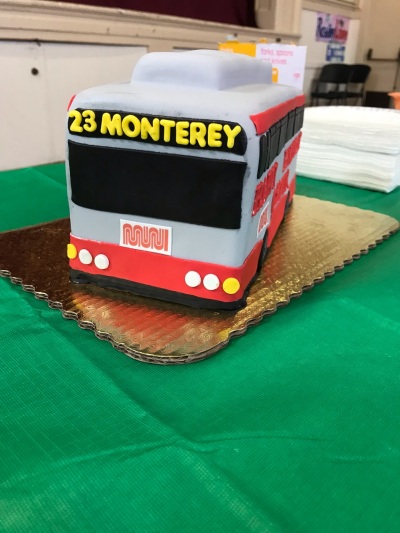 The party was such a success that Calvin asked if we could have another birthday party the following weekend. He’s also asking for a BART-themed cake for Christmas.

Just a few days after Calvin’s birthday it’s my birthday. Dear readers, I do not lie about my age. I’m 48. I earned it, and I own it.

I celebrated by doing things that I love like eating vegan food and drinking beer with some of my favorite people. I finally checked out Standard Deviant Brewing. They have some tasty brews, and I really loved their saison and they had a really good oatmeal stout on tap.

After a few beers, I had dinner at Shizen, which serves vegan sushi. That’s right, VEGAN SUSHI. That shit is delicious. I also got to go to SF Brew and Vegan Eats. Finally, a beer festival in which I’m not forced to only eat the fries. It was everything I dreamed it would be.

This country is a dumpster fire right now, but I’m trying to stay positive.

I really love this time of year, and not just because it’s my birthday season. Fall is my jam. Pumpkin everything. Orange is everywhere. The weather is nice. Scary movies are easy to find on Filmstruck, TCM, Netflix and Hulu.

I was chatting with a coworker today, and I told her that we should buy fall homes, instead of summer homes, and we could hop from house to house and just live in the fall all year long.

2 thoughts on “Let’s catch up”