Let me start by saying this: Welcome to the family, Jennifer! I hope you like randomly appearing in blog posts, because by joining our family you have waved your right to privacy. I’m sure Eric mentioned that.

So, yeah, we started the trip out right by taking Amtrak instead of driving. It’s affordable, and it takes less than 2 hours. Plus, there’s beer.

Eric and Jennifer got married on the Delta King, which is a refurbished riverboat with hotel rooms. Calvin was SO EXCITED to sleep on the boat, so when they offered as the Captain’s Quarters at a discounted rate (and the bride and groom didn’t want it), we were more than happy to take it. It’s at the front of the boat with a terrific view of the river and the bridge, which has trains riding over it practically even 15 minutes.

Calvin was in heaven.

We also went to a Rivercats game. The Rivercats are the triple-A team for the San Francisco Giants, and they just happened to be playing The Aviators, which is the triple-A team for the Oakland A’s. It’s a really fun ballpark. There was a lot of delicious food to be had and beer to be consumed. It’s so casual. The ball players were taking selfies with fans, signing balls and one of the players handed a kid a bat to keep. It was really, really fun. If there’s a triple-A team in your area, you should go.

Check out how AMAZING my niece Lucy looks. Her hair is gorgeous. It’s purple and blue, and she looks like beautiful mermaid. Oh, and Calvin looks super cute in his yellow bow tie, which strangely he was totally fine with wearing. He must’ve known that he looked gooooood. 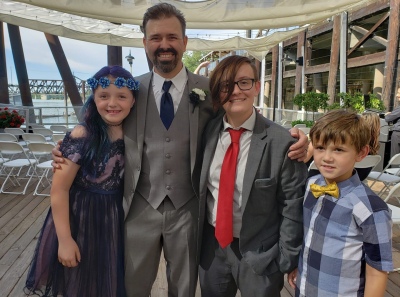 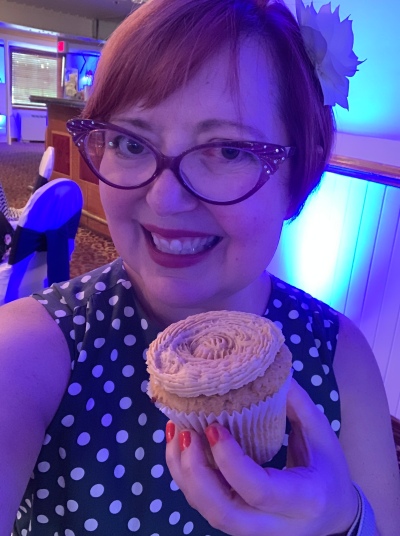 Me and my date, vegan carrot cake cupcake 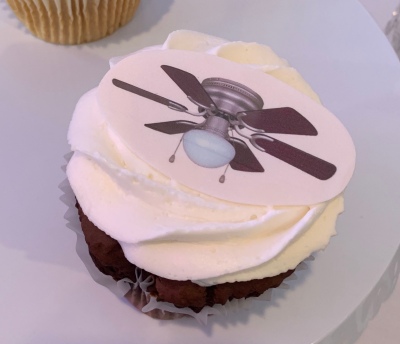 Seriously, though, the bride and groom were kind enough to order two special cupcakes: one for me (the vegan) and one for Calvin (egg allergies).

We also visited the California State Train Museum. We went there a couple of years ago, and it was fun. Calvin was even more into it now. My favorite thing that happened in the museum was Calvin talking to one of the volunteers, and the conversation went like this:

Calvin: “Where are all the people?”
Volunteer: “We’re people.”
Calvin: “Are you sure?”

Yeah, so, I’m super excited to announce that my new podcast with Margo D. is out there in the world.

It’s “What a Creep,” and every week we will talk about a creep. But don’t worry. We don’t want you to think the world is a complete dumpster fire, so we’re adding every episode with someone who isn’t a creep. So far, we’ve talked about Lance Armstrong, Newt Gingrich, Elizabeth Holmes and Mel Gibson.

You’d think that talking about someone who is a huge asshole wouldn’t be fun, but I swear it is. You should listen. Coming out this Friday is Chevy Chase. Be glad that he’s Chevy Chase and you’re not is all I’m saying.

In other podcasting news, there are a few new Dorking Out episodes for you to catch up on, including “Speed,” “Fatal Attraction” and “Baby Boom.”

Up next for Dorking Out is “Creed,” which most likely includes “Rocky” and “Creed 2” in the discussion.

Yeah, so, Elizabeth Warren turning down an invitation from Fox News to do a town hall is my new spirit animal. 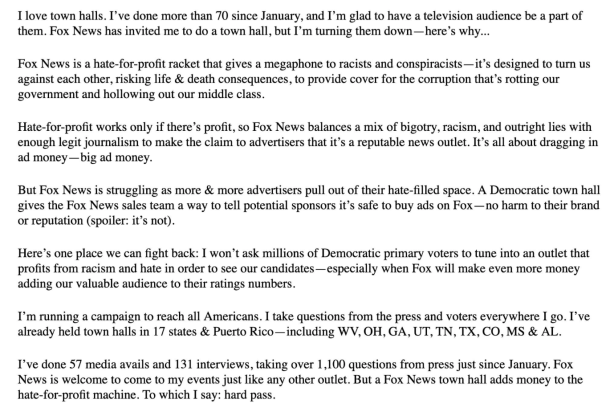 I think this country needs a Warren/Harris 2020.

Yeah, so, apparently I love the sound of my own voice (and Margo’s voice) because I’m doing another podcast with my podcasting sister from another mister, Margo D.

Our new podcast, What a Creep, starts Friday. We’re going to talk about creeps! My friends, you are going to LOVE THIS ONE. Margo and I are going to alternate stories about creeps, and every episode will end with a story about someone who isn’t a creep, so you don’t end the podcast thinking the world is a dumpster fire. 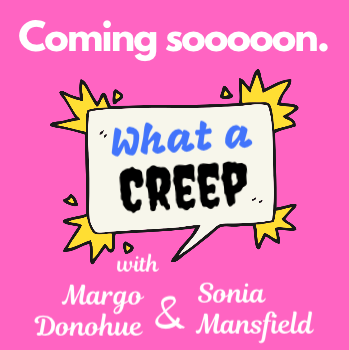 Don’t worry, though, Dorking Out isn’t going anywhere. We will still have new episodes every week. Here’s what you’ve missed lately: 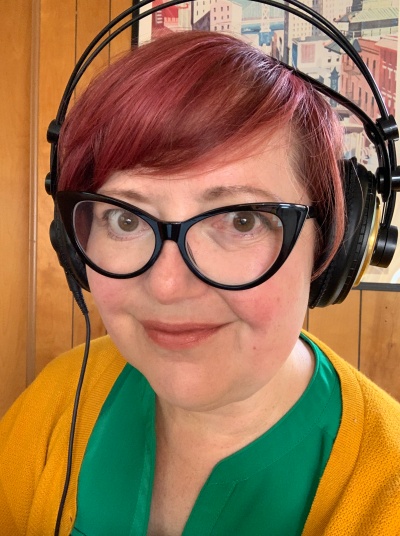 Yeah, so, we went to the A’s game today.

It was their Autism Awareness game, and they opened their new sensory room. It’s for autistic people, people with sensory processing disorders, Down syndrome, PTSD and dementia.

Ballparks can be loud and overwhelming. This is a nice quiet suite with noise-canceling headphones, fidget toys and bean bag chairs. It’s got a beautiful view of the ballpark.

At first, we were the only ones in the new room, but as the game progressed more and more people stopped by. Eventually, there were about 7 kids in the room. So, it was 15 people who were really happy and grateful to be there. 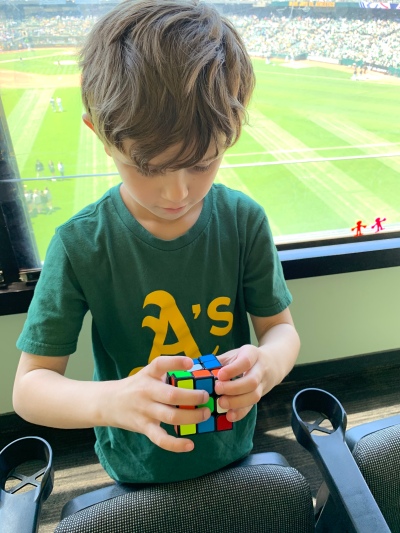 And after the game, we get to do one of Calvin’s favorite things: ride BART. 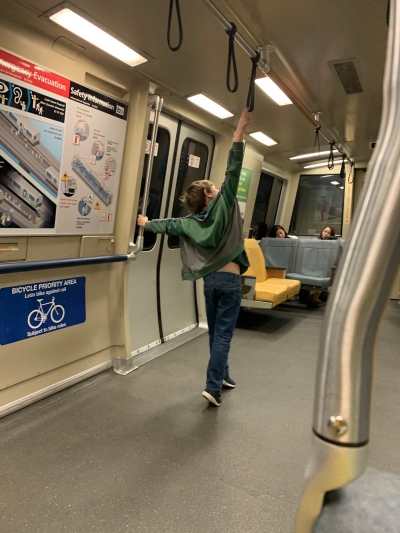 Long-time readers of this blog know that I’ve always been a San Francisco Giants fan with the Oakland A’s as my second, and for my mighty, mighty good man David it is the reverse. We love baseball. We root for the Bay Area teams, except for the 49ers, because football – meh. But other people love the 49ers and good for them.

Anyway, I have been so impressed with the Oakland A’s. They are doing so much to appeal to families and, well, people who just love baseball. I can’t say for sure what goes through the SF Giants leadership’s mind, but it appears that they are mainly interested in people with money. They’ve got the Gotham Club and the Cloud Club – both of them cater to folks with money. Regular ticket prices are pretty high, too, which makes them not ideal for families or people with a limited amount of disposable income. Not to mention, this happened, this happened again – oh! – and this happened, and, well, that makes me not want to give them my hard-earned money right now.

At the A’s, we were able to afford their All Access Pass, which gives us seats to 10 games BUT we can go to every home game and sit in the Treehouse (which is rad, and Calvin loves it). Plus, we get 50 percent off concessions and $10 parking. I know, RIGHT?!

So, yeah, I know what you’re thinking, “Check out the fair weather Giants fans.” First of all, RUDE. Second, that’s not true. I still root for the Giants. But, I think the San Francisco Giants are the fair weather fans. They left me. They appear to be more interested in tech money than fans like me. What sucks for the Giants is that all the big tech money is going to move on to that shiny new Chase Center soon, and then the Giants will be all, “Take me back, baby. It will be different this time.” And honestly, I don’t know if it will work … it might, though. Once they dump their racist co-owner, I’ll consider it.

Maybe part of my issue isn’t just the Giants, but San Francisco, too. San Francisco was the city that everyone moved to when you didn’t fit in anywhere else. Freaks and outcasts welcome. It’s one of the amazing things about this city. I think it is still that, but it’s also about tech and money. San Francisco always has an ebb and flow when it comes to tech money, and right now it’s really flowing and it’s drowning out a lot of cool people and businesses. It’s frustrating, but I also know that’s part of living in a big city like San Francisco.

Let me put it another way: Right now, it feels like tech bros are the new jocks, and the rest of us are nerds getting dumped in trash cans.

I’m just ranting. I apologize, my friends … My point is … what was my point? Oh yeah! Baseball.

The A’s are doing so much to cater to families and attract younger fans. I feel like they are cultivating the next generation of fans.

We have taken Calvin to many games throughout the years, but after this most recent trip to the ballpark, he asked if we could go to another game sometime soon, and that was a first. It made me want to cry, and it made me an A’s fan.

Yeah, so, I’m going to Confab, a content strategy conference in Minneapolis next week.

In preparation for it, I decided to print some business cards for myself. I wanted a business card that truly reflected my personality and showcased the aspect of content strategy that is really important to me: the fun part.

What do you think?

Yeah, so, I’ve got a couple of podcasts to share with you.

Fletch – Former co-host Chris Smith returns to talk about “Fletch” and update us on his documentary series, “Three Days In Paradise.”

The Devil Wears Prada – I’m probably two or three stomach flus away from my goal weight. Margo and I had so much fun talking about this one and Margo has some great stories.

Oh, and Margo and I were invited to go on my favorite podcast F This Movie to talk about “Revenge of the Nerds.” NBD! 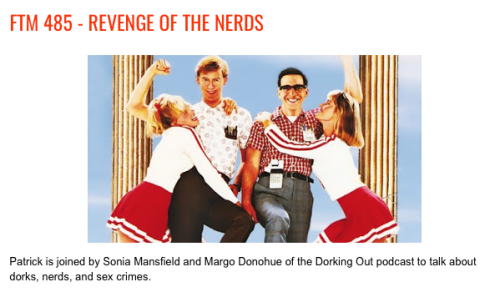 Also, Margo and I have an exciting announcement soon, so stay tuned!

Seriously?! The ignorance of anti-vaxxers boggles my mind.

I have a lot of thoughts and feelings about this, and they all involve a lot of swearing and yelling, so I’m going to let Scientific American take it from here …

Yeah, so, every year my mighty, mighty good boy Calvin’s school has a fundraising event. This year it was a masquerade ball.

It’s tough to wear a mask when you were glasses. I entertained the idea of buying a mask that clips on to my glasses, but I didn’t want to ruin my precious glasses. I settled for a mask on a stick. I didn’t feel that was festive enough. So then I got it into my head that I should put something on my head. I bought this headband adorned in colorful butterflies on Etsy. 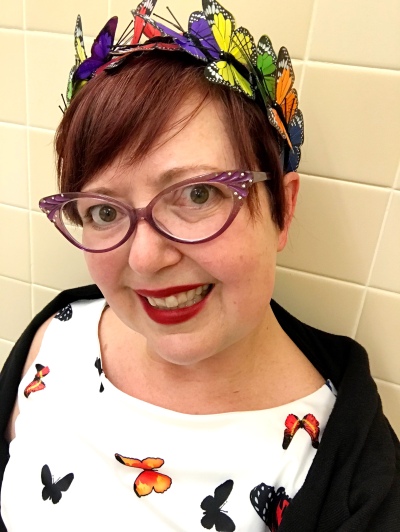 I knew that everyone would be all mardi gras, so I decided to do my own thing, which turned out to be butterflies. I have no explanation for why I choose butterflies other than I think the headband is really pretty.

Also, look at my mighty, mighty good man David … isn’t he so dreamy?

The media, in its quest to appear impartial, gives racists, bigots, anti-vaxxers and climate change deniers a platform to promote their lies. The media is both-sides-ing this country to death.

I’m over it, my friends. You say this bullshit to me, I’m not going to pretend that we have a difference of opinion. I will tell you that you’re wrong.